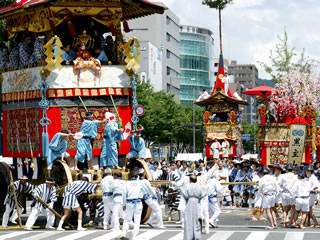 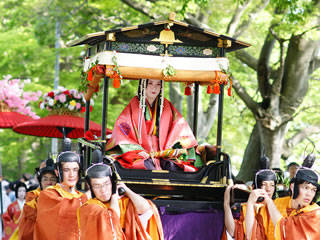 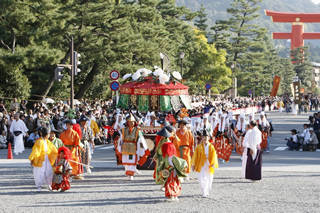 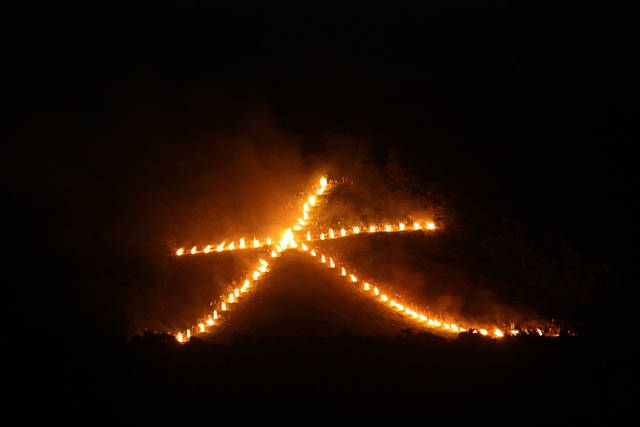 宗教的行事でありますが、地元の人々によって始められ、受け継がれている行事です。
The festival of ancient capital Kyoto has many festivals featuring history, including the Gion Festival, one of the three biggest festivals in Japan.

Among them, Gion Festival, Aoi Festival, Era Festival of the three major festivals that represent Kyoto.
And we will introduce the three fantastic fire festival, Kurama horse festival, Sen-no-lighting, Kyoto Gosan fire!
<Tell the styles of the town "Gion Festival">

It is a festival held over the course of a month during the period from July 1 (Yoshinogi) to 31 (Nishikoshi Festival) of Yasaka Shrine every year.
In general, the Yaeyama is widely known on the 17th (pre-festival · Yamahoko cruise and Shinko festival) and on the 24th (late festival · Yamahoko cruising and returning festival), and a variety of other festivals are held.
This festival boasts a tradition of 1000 years and has been walking with the history of Kyoto as a result of repeated interruption and revival.
Yamaboko which can be said as a symbol of the festival is creatived by the hands of the townspeople, and its content appearance is luxurious and gorgeous.

<The "Aoi Festival (Kamo festival)" of the aristocratic festival>

Aoi Festival (Aoi Matsuri) is one of the three major Kyoto festivals, the most graceful and old-festival festival among our festivals.

From the Kyoto Imperial Palace to the Shimogamo Shrine / Kamigamo Shrine Elegant Matrix like New Year's Heiwa Shrine, boat cars and mikoshi decorated with Aoi's leaves, as well as a total of more than 500 Peaceful paintings.

It is the oldest festival in Kyoto, boasting a 1400 year history, telling the dynasty customs now.

<Dating back to the era from the Meiji Period>

The era festival (festival festival) was one of the three major festivals in Kyoto, celebrating the creation of Heian Shrine in Kyoto city.

Although it is shallow in history compared to the Aoi Festival and the Gion Festival, it is a period matrix of about 2000 people going back from the Meiji era to Edo, Azuchi Momoyama, Muromachi, Yoshino, Kamakura, Fujiwara, Era and Eight era, and history Brilliant festival that revives before.

It is a festival that can only be done in the city of Kyoto which was the center of each era, and it is a festival of citizen raising Kyoto citizen as the subject.
<One of Kyoto's three biggest festivals, "Kurama fire festival" holding torches>

Kurama fire festival (Kurama no Hi Mamari) is one of the Yuki Shrine festival festival in Kurama, Kyoto City Sakyo Ward.
One "Kurama fire festival" of Kyoto Three Grand Dynasties festival is the transition from the North to the Kurama Temple in the north and Yuki Myojin, which was secretly dedicated to the Imperial Palace, in the middle of the Heian era when the disturbance and unfortunate succession went in the middle of the Heian period It is said that it was the origin.
It is a brave and beautiful fire festival filled with the brave voice of 'Sireaia, Saori' with the flames of torches where the village of Kurama burns up.

<Candle is a fantastic 'Senbon lighting'>

It is also the beginning of the Nanno Buddhist Temple that Kobo Daishi (Kukai) buried and mourned an unnamed remains that was left unattended.
In the middle of the Meiji Period, it is said that the beginning of the Senbon Lighting ceremony began to collect irrelevant statues by gathering the surrounding tombstones and stone Buddha in one place.
Light candles on irrelevant Buddhist monuments numbered in the West Buddha's river in Nembutsuji temple, which is counted as about 8000 bodies, and hand them together to sacrifice.
It is a religious event that has continued since the Meiji era and is widely known as a scenic feature of Sagano in the summer.
<Famous ignition fire famous for capital lettering>

Kyoto Goyama Sentiment is one of the events representing the summer of Kyoto, in line with the Gion Festival. It is an Obon Festival that has the meaning of feeding a spirit of sending an ancestral spirit.
Every August 16th, five mountains surrounding Kyoto will be ignited in the order of "capital letter", "my legend" "ship form" "left capital letter" "torii shape".
"The capital letter" of Higashiyama Risozigakige is best known, and "Mikoto · Law" of Matsugasaki Nishiyama · Higashiyama, "Ship shape" of Nishiga Mineyama, Kinkakuji near Okitama Mountain (Capital letter) Left capital letter "and" Sugaruzenji Terayama (Mt. Mt. Kanayama / Mandala mountain) "of the torii shape".

It is a religious event, but it is an event that was started and handed down by locals.